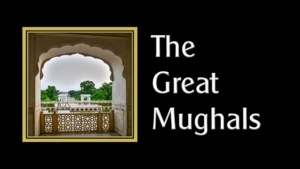 Khanzadeh Begum is one of the forgotten women of history. She played an important role in the careers of Babur and Humayun, and was a pillar of the Mughal dynasty in its formative phase. The early historians, including Babur himself, mention her, but the modern historians often do not.

She was born around 1478, the eldest child of Umar Sheikh Mirza (Babur’s father.) Mirza was an easy-going person given to opium, women and Sufi poetry. The strongest role model for his children, including Khanzadeh and Babur, was obviously their mother, Qutlugh Nigar Khanum. Qutlugh’s own mother, very much around when the children were growing up, was also a dominant type, and here we have three generations of strong women.

Khanzadeh was five years older to Babur, and her attitude towards him was motherly. When they lost their father in 1494, Babur was only twelve, and fell back on his mother and grandmother for moral support. It is possible that Khanzadeh also pampered him at that stage, but the incidents of that period were never written down. We only know that six years later she was at Samarkand when the formidable Shaibani Khan attacked that city and took it away from Babur. He was married to Qutlugh’s sister (Khanzadeh’s maternal aunt), but he demanded a political marriage with Khanzadeh, and Babur had to concede in order to save his own life.

Khanzadeh was twenty-three at that time, and while the early historians don’t tell us if she had been married before, modern historians take it for granted that she had been. If so, Shaibani must have arranged for Khanzadeh’s husband to divorce her, just as he divorced her aunt to make this marriage legal. Khanzadeh bore him a son, who was named Khurram. He was five when Shaibani made him the nominal governor of Balkh. Soon afterwards Khanzadeh was divorced because she couldn’t stop interfering in the affairs of the state to protect the interests of her brother Babur. Why did she do that? It is quite tempting to imagine an angry streak in the young woman who had been made a rolling stone while still in her mid-twenties. It is possible that she was reminding Shaibani that if her brother’s interests were not a consideration, she wouldn’t have been living with him in the first place. It seems that Khanzadeh refused to live as Shaibani’s wife, and only as her brother’s ambassador. In any case, Shaibani married her off to one of his companions called Sayyid Hada. The casual pattern of marriages and re-marriages displayed in the story of Khanzadeh was something that was to become unimaginable once the House of Taimur would settle down in India.

Khurram died while still a child and soon afterwards, in 1510, Shaibani went out to fight the fanatical Persian King Shah Ismail. He got killed. Khanzadeh’s latest husband also fell in the same battle. The spoils collected by Shah Ismail after that battle included her. “He treated her well for my sake,” Babur narrates the rest of the story. “He gave her a sufficient escort to Qunduz [fusion_builder_container hundred_percent=”yes” overflow=”visible”][fusion_builder_row][fusion_builder_column type=”1_1″ background_position=”left top” background_color=”” border_size=”” border_color=”” border_style=”solid” spacing=”yes” background_image=”” background_repeat=”no-repeat” padding=”” margin_top=”0px” margin_bottom=”0px” class=”” id=”” animation_type=”” animation_speed=”0.3″ animation_direction=”left” hide_on_mobile=”no” center_content=”no” min_height=”none”][Kunduz] where she rejoined me. We had been apart for ten years … neither she nor those about her knew us, although I spoke. They recognized us after a time.” Babur was a boy of seventeen when he was separated from Khanzadeh. Now he was twenty-eight.

Khanzadeh was married again, this time to Mahdi Muhammad Khwaja. He could have been Khanzadeh’s first husband before she was given over to Shaibani, but that is mere speculation, even if a plausible one. All we know for sure is that Khanzadeh remained an inspiration for Babur in many ways, and seems to become a kind of mother figure for the romantic prince in his later life. One of the last things Babur did before his death was to arrange the marriage of two of his children, and he didn’t do that without seeking Khanzadeh’s permission first.

Khanzadeh re-appears on the political scene of the House of Taimur during the turbulent days of Humayun’s exile. She was his ambassador to his ungrateful brothers and led an embassy over the long and difficult route from Sindh to Qandahar and Kabul. On one occasion, when Mirza Kamran was intent upon getting the khutba (Friday prayer sermon) read in his name in Qandahar, Khanzadeh served as the arbitrator who pronounced her stern verdict, “Your father bestowed his kingdom upon Humayun, and he alone should rule over it.”

Soon afterwards, she died in the mountains of Afghanistan and was buried in the compound of her brother’s tomb in Kabul, along with her husband Mahdi Khwaja.

The shadowy life of this half-forgotten princess serves as a reminder that the men who were credited by historians for shaping history had a private life too, and women like Khanzadeh Begum influenced it. The adventures of Khanzadeh also remind us that before the House of Taimur adopted the strict purdah (veil) in the days of Shahjahan, their women were quite used to taking long journeys over tortuous mountain routes, often with no means of transport except mules and horses. But most importantly, the presence of half-forgotten women like Khanzadeh Begum poses an uneasy question: how much of history do we really know?

Next in the series: Humayun