Some widespread beliefs of our times are being questioned here, such as the notion that we are living in an age of spiritual decline.

In this paper it is argued that it was no coincidence that between 1887 and 1946, the Indian Muslim community collectively adopted three successive goals and achieved each of them in a fixed period. The founding parents of Pakistan were very well aware that their community had unlocked a unique human potential, and a rational explanation had already been offered by Iqbal.

Supporting evidence for my claim has already been presented in my academically acclaimed work, Iqbal: His Life and Our Times (2014). This paper builds on that work to shed new light on the relationship between the philosophy of Iqbal and the empirical reality of human existence.

This paper could have been titled ‘Don’t Let the Muggles Get You Down’. The author of the Harry Potter books has fired our imaginations by presenting a world where some people are born with the ability to perform magic. They are wizards and witches. Those born without such ability are called Muggles. Leaving them aside for now, let’s dwell for a moment on the happy thought of having such special powers that we just have to wave a wand, say what we wish to happen and it shall happen.

Consider, for instance, the fact that between 1887 and 1946, a certain community pursued three goals one after the other. Not only they achieved all the goals, but each goal was achieved in the same duration. It always took twenty years:

It is true that a lot of factors may have contributed to the completion of each goal. We know them from the more familiar histories of the period, which mention such events as the formation of the League, the Lucknow Pact, the Fourteen Points, and so on. Yet those histories fail to make us aware that such events were only steps towards the achievement of some greater goal that had already been adopted collectively. In view of the fact that the goal always got accomplished in the same duration, does it not seem like magic after all? As if a community of wizards waved its wands and said, ‘Let us become an actual nation,’ and twenty years later there was an actual nation with its very own political organization. So on and so forth.

Could it be that there are certain conditions to be fulfilled at the time of choosing a goal, and once a goal is adopted in that manner, there is no stopping it?

There are three ways of addressing a conflict: domination, compromise and integration. Domination means that one side gives in. Compromise means that both sides give up something. Both approaches reflect badly on human nature – are our hearts not big enough to make everybody happy?

The American political scientist Mary Parker Follett (1868-1935) prefers the third approach: ‘When two desires are integrated, that means that a solution has been found in which both desires have found a place, that neither side has had to sacrifice anything.’

This is practically the same thing as Iqbal’s reinterpretation of the Islamic idea of consensus (‘ijma’), and his comment on the ideas of Follett was that they were the political equivalent of the spiritual principle proposed by him (Shafique 2014).

Integration was also the aim of most Sufis. It was famously described by the thirteenth-century Sufi poet Maulana Jalaluddin Rumi in his ‘parable of the grape’, where four men found a coin and disputed with each other over which fruit should be bought with it. They were in fact naming the same fruit, grape, in four different languages. Rumi says that if only there were somebody who knew all four languages, such a person could have fulfilled the desires of all four men with that single coin.

This principle of integration appears to be the magic wand that made it possible for the Indian Muslims to achieve all their goals just by naming them. We can say this because we see that each of their three goals integrated the desires not only of their own nation but also integrated them ‘internationally’ and globally.

Nationally, i.e. within the community itself, integration became the operative principle at the very inception of the Mohammedan Educational Conference in December 1886. As its founder said:

We should meet and convey to each other our views regarding the education and progress of the nation. Whatever mistake there might be in our thinking should get corrected through the views of others, and the course of action acceptable to everybody should be adopted. (Shafique 2014)

The goals also integrated the general will of the other nation – the Hindus – as expressed by them at the time, and hence ‘internationally’. For instance, the premise for the formation of the Conference in December 1886 was that ‘we are already called a nation’. This was to acknowledge that the Hindus also perceived the Muslims as a separate nation. It is true that the Indian National Congress had been founded a year earlier, yet the idea of an ‘Indian nation’ was a purely intellectual concept picked up by the middle-class pioneers of the Congress from the education they received at universities founded by the British rulers (Ali 1987).

Likewise, the principle of communal representation adopted by the League in December 1906 was applauded by some of the leading Hindu leaders right away, such as G. K. Gokhale. Later, C. R. Das, the Hindu visionary from Bengal defended it eloquently while referring to the ‘new democracy’ as expounded by Follett. It used to be mentioned frequently at that time that the acceptance of this principle by the Hindus through Lucknow Pact (1916) immediately brought love and unity between Hindus and Muslims, only to be shattered after the extremist Hindus demanded repudiation of the Pact in 1922.

Even the idea of self-rule that eventually translated into the birth of Pakistan had been proposed by the Hindu Mahasabha, the extremist Hindu organization, before being adopted by the Muslim parties as ‘Delhi Proposals’ in March 1927. The proposals were immediately applauded by the Indian National Congress too.

The third dimension of the goals of the Indian Muslims was universal. Although all three goals were adopted by integrating the desires of the two native nations, they turned out to be also consistent with the ideals of those Western thinkers who shared the underlying belief about human nature. As mentioned earlier, the principle followed by the Indian Muslims in pursuance of their first goal, i.e. nationhood, was the same as the one expounded by Renan in France around that time. The Muslims of India did not know it then, but the relevance of Renan was later explained quite satisfactorily by Iqbal in the Allahabad Address. Communal representation, the second goal of the community, was understood by C. R. Das as a South Asian equivalent of ‘group organization’ proposed by Follett as the basis of ‘new democracy’.

The social contract theory of Rousseau was mentioned by Iqbal with reference to the third goal of the community in the Allahabad Address, but in a manner that incorporated Follett’s modification to that theory. ‘After all,’ said the Quaid-i-Azam, ‘the story of Pakistan, its struggle and its achievement is the story of great human ideals struggling to survive in the face of odds and difficulties.’

3. Iqbal and the chamber of secrets

In the world of Harry Potter, a wand can only be used by a wizard or a witch, and not by a Muggle. In a like manner the magic of integration also requires certain traits. Follett identifies them as (a) a high order of intelligence; (b) keen perception and discrimination; and (c) more than all, a brilliant inventiveness. It seems that all these tendencies proceed from a particular belief about the human being, i.e. the human nature is ethically good and essentially consists of will, not intellect or understanding; and therefore the salvation lies in achieving freedom from fear and grief.

We can say that those who share this fundamental view of human being are the wizards and the witches in the real world – the world of Iqbal and Follett. They can make things happens by using the magic wand – the principle of integration. In fact, it appears that thinkers from diverse cultures and religions who share this common belief about human nature have been developing a common idea at the same pace, even without being in touch with each other. In the eighteenth century when Rousseau searched for a natural law, the same quest defined the career of his senior contemporary Shah Waliullah in the Mughal India, although they were not familiar with each other’s work. In the next century, when the findings of Rousseau led his countryman Ernest Renan to discover a certain principle for defining nations, Sir Syed Ahmad Khan put the same principle into practice at almost the same time. Likewise, the final instalment of Secrets and Mysteries was published in 1918, and so was The New State by Follett. The only thing common between all these thinkers was the above-mentioned belief about human being.

Tendencies that become obstacles to integration have been identified as (a) a habit of enjoying domination; (b) theorizing over a matter instead of taking it up as a proposed activity; (c) communication gaps due to misinterpretation of language and symbols; (d) undue influence of leaders; and (e) our lack of training for integration. These tendencies turn us into ‘Muggles’ – nobody is born without the power of ‘magic’ but some lose it due to these mental habits.

The birth of Pakistan (including the present-day Bangladesh at that time) was the culmination of a process that involved the successful achievement of all collective goals of a nation during a period of sixty years. The reason for their success was that their goals always represented an integration of desires nationally, internationally and universally. Since this is the only case study that shows us the working of the principle of integration at the level of a nation and a state, there is no evidence as yet to contradict the conclusion that might be derived from it even if the conclusion is ‘unbelievable’ as such. It is to say that once a nation adopts a goal that integrates the desires of its own diverse schools of thought as well as those of other nations, there is no stopping the goal from being achieved. Its completion will not depend on the apparently available resources nor hampered by the odds against it. It shall fulfil itself as destiny – the ‘realizable possibilities’ that lie within the depths of human nature and ‘serially actualize themselves without any feeling of external compulsion’ (Iqbal 1934).

In my book, Iqbal: His Life and Our Times, I have offered this case study in greater detail. I would like to recommend it to anybody who desires further exploration of the principle of integration at the macro level. 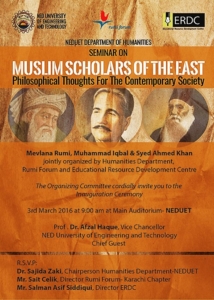 This paper was originally presented with the title, ‘Pakistan as the emergence of the “new human being”‘, on 3 March 2016 at the seminar ‘Muslim Scholars of the East – Philosophical Thoughts for the Contemporary Society’ (Sub-theme: ‘Iqbal: Existential Questions to Collective Whole of Humanity’) held in Karachi by the Humanities Department NED University of Engineering & Technology in collaboration with Rumi Forum & ERDC.

Subsequently, a truncated version appeared in the Journal of Social Science and Interdisciplinary Research (JSSIR), Volume 4; No.2, “December 2015” (backdated), pp.18-21. Regrettably, the editors replaced some of my phrases wth sexist language (something I need to point out as I have been among the earliest proponents of non-sexist language in Pakistan).

1 thought on “The emergence of a ‘new human being’”