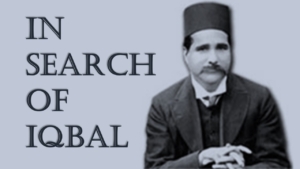 Let’s be honest about this. A reference to Iqbal often generates sneers or boredom. So much for 56 years of celebrating Iqbal as the national poet — and celebrating him to death! Let’s approach the question with a fresh start: is he relevant today? Are his works worth the paper they are printed on (keeping in mind that they are very often printed on deluxe paper)? Is his dream as a politician and visionary something that we can fall back upon, or should we discard it as pre-World War luggage hampering our speed in the new century?

Let’s approach these questions from the perspective of our interests, and let’s not display in our judgment any deference to Iqbal simply on the ground that he is our national poet and the ideological father or because he is, oh, so great.

His legacy may be divided into three interrelated parts: thought, poetry and politics. Let’s begin with the first.

Iqbal’s major prose work is The Reconstruction of Religious Thought in Islam, a collection of seven lectures from the last decade of his life. Here is the problem: beautiful, astonishing statements of Iqbal on life and the universe are buried under cumbersome quotations from early 20th century best-sellers of popular philosophy, genuinely outdated and off-putting for a modern reader. Iqbal’s key concepts, however, can be salvaged from beneath the debris and a map of his universe be drawn up (Iqbal himself insisted on the transitory nature of these lectures and we can safely take him as an authority on his own work).

Iqbal’s approach is opposed to compartmentalization. We live only one life, and we live it as a whole. Therefore, it is harmful to distance spirituality from science; and purposes should be revised and unified, so that one day of your life feeds into the other and you grow stronger. To be free is most essential to Iqbal, and true freedom — political and psychological — comes only through vigilance.

To him, “the ultimate nature of Reality is spiritual,” but it must also be “conceived as an ego.” God is “the Ultimate Ego,” and “a rationally directed creative life.” The most divine element in the human being is, therefore, the ego, which unites us with God, so that we may become “a co-worker” with Him. Another construct remarkably redefined here is “destiny”. Iqbal doesn’t see it as predetermined, but merely as an ever-changing cluster of possibilities in the heart of this universe.

In his verse masterpiece, Javid Nama, he explodes in anger against those who cling to pessimistic concepts of life: “Go and ask God to give you a good destiny — He is bountiful, so He must have plenty for you to choose from. If it is the destiny of glass to be broken, very well then, transform yourself into a stone, because humans can change. You change your destiny when you change yourself.”

In his lectures he constructs, brick by brick, a coherent universe. He trusts the future generations to update this picture and point out his shortcomings with the same ruthlessness that he has displayed in the criticism of his predecessors; he would be happy, as long as everything is seen from a holistic human point of interest.

Having established the basic precepts of Iqbal’s thought, let’s now turn to his crowning achievement—his poetry. Here’s the irony: every student in Pakistan is taught Iqbal from the first grade to graduation, but comes out of the university without ever hearing the name of his magnum opus. This is Javid Nama (or Javid Nameh, in modern Persian pronunciation).

Intellectual common sense (if intellectual integrity is too much to ask for) demands that this work must serve as a reference point to his other works. To him, Javid Nama is what Paradise Lost is to Milton, or The Republic is to Plato. Can there be forgiveness for the academic dishonesty of our curriculum designers who scrounge upon the time and energies of our students in the name of Iqbal for fourteen years and yet leave those students without a single clue about what is contained in the one book he called “the sum total of my life”? It is like reading Shakespeare for fourteen years and not hearing the name of Hamlet!

Javid Nama is an epic poem (and doesn’t it come as a surprise that Iqbal also wrote an epic?). The fact that it was originally written in Persian should not deter us: translations are available. It opens on the day of creation with Iqbal’s very own account of how the universe came into being. A bright sky taunts the Earth for being lightless, but a consolatory message from the heavens predicts the human being, who will rise from earthen clay and ascend the skies.

Centuries later, we find our poet glooming over his mortality and singing a sad song on the riverbank. The lyrics are from Rumi, whose soul now appears and some questions about truth and existence are answered in such powerful language that Zurvan, the Spirit of Time, manifests itself to reveal a big secret: time and space can be conquered! Now we learn that the Prophet overcame these limitations sometime after the beginning of our story. He ascended the heavens on the night of Meraj. The gates, once opened, now await anyone who dares transcend the material world with the divine spark lodged in the human soul (hence the spiritual nature of reality, established through long-winded argument in the lectures, is reinforced here).

Stars welcome the poet as he is guided by Rumi in a skywards journey. Over there he meets several souls — blessed as well as damned. Not a single one has been condemned or rewarded on the basis of religious beliefs alone — Buddha and Zarathustra dwell among the prophets and a Hindu poet is lodged in Paradise, while a pair of traitors (incidentally Muslims) suffer everlasting torture.

As one should expect from a well-humoured poet, Iqbal doesn’t forget to bring houris into his story. Of course, they crave for his company while he chooses to move on (but not without reciting one of his ghazals on popular demand). Eventually, the poet learns the secrets of immortality from God (mentioned here as “the Voice of Beauty”), and then faints at the sight of the primordial Majesty.

A most interesting chapter in this epic is about a spiritual breed on Mars. The evil spirit tempted their progenitor, just like Adam was tempted, but this one resisted. Consequently his children were spared the restricting duality of matter and spirit, and live a life without scarcity, poverty, needfulness or tyranny. This prosperous colony is Iqbal’s ideal world, and only the demons within us prevent us from achieving it on this earth — the above-quoted outburst against fatalistic interpretation of religion occurs in this chapter.

The significance of using Javid Nama as a reference point for other works of Iqbal becomes clear when we see how the seemingly banal “Khudi ko ker buland itna keh her taqdeer say pehlay…” from another anthology suddenly acquires a fascinating new dimension in the light of the detailed discourse on destiny here.

This leads us to Iqbal’s politics, and his so-called “dream” of a homeland for the Muslims. Rather than dwelling upon interpretations given by others, let’s ask Iqbal himself. If we take up his very first book (a prose work on political economy), the shadow of this dream glows even there on the second page. “A question has arisen in this age, viz., is poverty an unavoidable element in the scheme of things?”

Iqbal wrote in the preface to Ilmul Iqtisad, published in 1904 when he was twenty-seven. “Can it not happen that the heartrending sobs of a humanity suffering in the back alleys of our streets be gone forever and the horrendous picture of devastating poverty wiped out from the face of this earth? Economics alone cannot answer, because the answer lies to a great extent in the moral capabilities of the human nature…”

Javid Nama, twenty-eight years later, was evidently his personal answer to the question, and the entire body of his work a lifelong effort to expand those “moral capabilities of human nature”. His famous Presidential Address of 1930, incidentally, was prepared for the All India Muslim League at a time when he was working on Javid Nama, possibly writing the very chapter about the Martian colony.

“The object of my Persian poems is not to make out a case for Islam,” he had stated long ago to the international press. “My aim is simply to discover a universal social reconstruction,” and he explained why it was philosophically impossible to ignore a social system that met this ideal of combining matter with spirit.

In order to place his Presidential Address in its true perspective, let’s imagine a very plausible scenario.

On a midsummer night in 1930, a fifty-three years old good-humoured gentleman fills his pen with ink, and then starts writing in his big notebook. He is describing an ideal colony on Mars. “And there I saw a grand observatory amid lush green grasses…” In simple Persian verses he is writing how he imagines the citizens of this fairyland to be.

“Their expertise in technology rivals that of the Europeans, they far exceed us in the knowledge of the body and the soul… We are confined in the duality of matter and spirit, but these people are blessed with a unity of thought…” And here, perhaps, he stops to lift a few blank sheets of paper from the other side of the chair, and, the nib of his pen still fresh from the ink of his verses, he scribbles in English, “I would like to see the Punjab, the North-West Frontier Province, Sindh and Balochistan amalgamated into a single state. Self-government within the British empire, or without the British empire…”

He goes on, “For [fusion_builder_container hundred_percent=”yes” overflow=”visible”][fusion_builder_row][fusion_builder_column type=”1_1″ background_position=”left top” background_color=”” border_size=”” border_color=”” border_style=”solid” spacing=”yes” background_image=”” background_repeat=”no-repeat” padding=”” margin_top=”0px” margin_bottom=”0px” class=”” id=”” animation_type=”” animation_speed=”0.3″ animation_direction=”left” hide_on_mobile=”no” center_content=”no” min_height=”none”][the region] it means security and peace resulting from the internal balance of power; for Islam an opportunity to rid itself of the stamp that Arabian imperialism was forced to give it, to mobilize its law, its education, its culture, and to bring them into closer contact with its own original spirit and with the spirit of modern times…” He pauses, and wonders if this dream would come true.