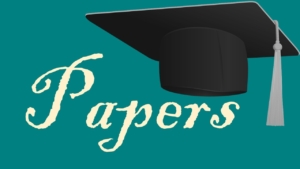 The following paper was submitted in December 2010 but has come out only recently in 2018 in a backdated issue of the journal. The  ‘Abstract’ that appears in the journal was not written by me and I am not including it here – 25 July 2018.

In Javid Nama, the spirit of Rumi takes Iqbal on a journey in search of immortality. The itinerary includes the spheres of Moon, Mercury, Venus, Mars, Jupiter and Saturn, and finally “Beyond the Spheres”.  On the Sphere of Moon, which is the first stop in the journey, they come across seven visions.

The following table shows how each of these demonstrates a specific type of intelligence, as the first column lists the seven visions encountered on the Sphere of Moon; and the type of intelligence corresponding to each vision is described in the second column. 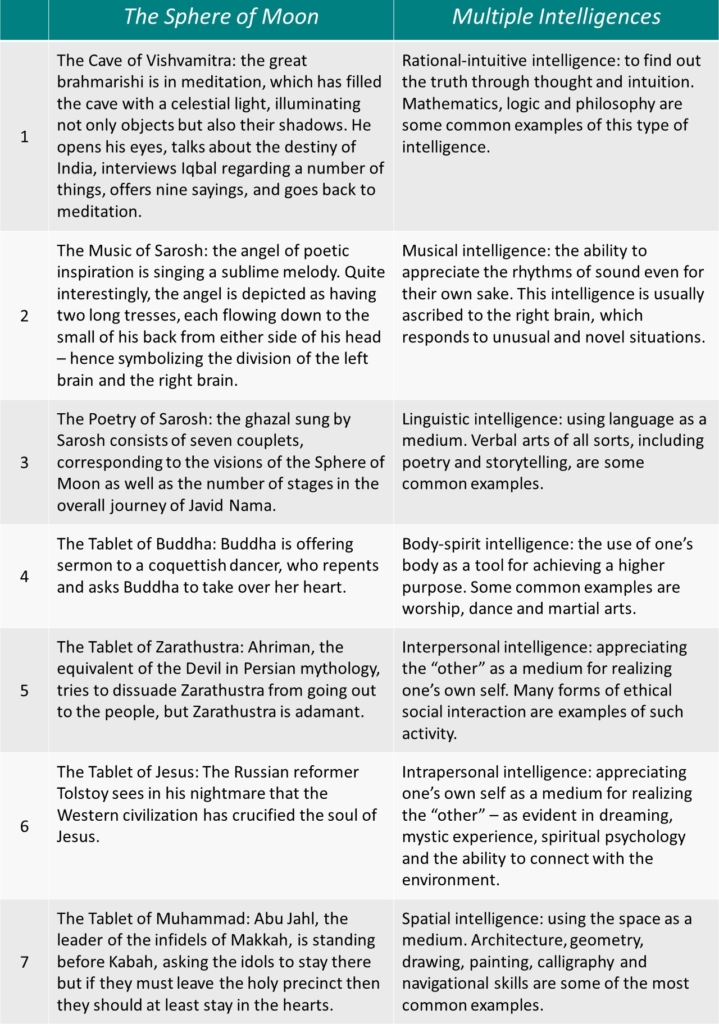 It may be observed that the sequence in which these seven intelligences are presented on the Sphere of Moon is the same in which they are acquired by an individual as one grows up from infancy to maturity.

A newborn child cannot express a thought in words, music, controlled body language or drawing and painting, but presumably some kind of thinking process must be at work although it cannot be expressed at this stage. Hence, the rational-intuitive intelligence is the first to be acquired by a newborn. Soon, it will enable itself to start responding to music, develop speech a little later and then finally gain control over body movement as well. Hence the musical, linguistic and body-spirit intelligences will be acquired and mastered.

Spatial intelligence, in its broader sense, may include an ability to place not only the physical objects but also the immaterial things in their proper place. This is a higher level of maturity, where a person is said to have finally “settled down”.

It can be a very interesting activity to compare the following passages from The Reconstruction of Religious Thought in Islam with the various types of intelligences demonstrated on the Sphere of Moon in Javid Nama.

Nor is there any reason to suppose that thought and intuition are essentially opposed to each other. They spring up from the same root and complement each other. The one grasps Reality piece­meal, the other grasps it in its wholeness. (Lecture 1: ‘Knowledge and Religious Experience’)

It appears that the time of the appreciative self is a single `now’ which the efficient self, in its traffic with the world of space, pulverizes into a series of ‘nows’ like pearl beads in a thread. Here is, then, pure duration unadulterated by space. (Lecture 2: ‘The Philosophical Test of the Revelations of Religious Experience’)

“The Sufi’s book is not composed of ink and letters: it is not but a heart white as snow. The scholar’s possession is pen-marks. What is the Sufi’s possession?–foot-marks. The Sufi stalks the game like a hunter: he sees the musk-deer’s track and follows the footprints.” (Rumi, quoted in Lecture 3: ‘Conception of God and the Meaning of Prayer’)

The ego, as an individual, is inconceivable without some kind of local reference or empirical background … In view of the past history of man it is highly improbable that his career should come to an end with the dissolution of his body. (Lecture 4: ‘Human Ego – His Freedom and Immortality’)

A prophet may be defined as a type of mystic consciousness in which ‘unitary experience’ tends to overflow its boundaries, and seeks opportunities of redirecting or refashioning the forces of collective life. (Lecture 5: ‘The Spirit of Muslim Culture’)

The search for a purely psychological foundation of human unity becomes possible only with the perception that all human life is spiritual in its origin. (Lecture 6: ‘The Principle of Movement in Islam’)

It may be that what we call the external world is only an intellectual construction, and that there are other levels of human experience capable of being systematized by other orders of space and time… (Lecture 7: ‘Is Religion Possible?’)

The concept of Multiple Intelligences was famously articulated by the American neuropsychologist Howard Gardner in 1983, with the identification of seven types of intelligences (and addition of two more later on). The model emerging from Javid Nama is radically different from Gardner’s, especially on the following points:

The similarities between Javid Nama and the theory of multiple intelligences need not surprise us too much because some of the earlier work in the domain of human intelligence, which was either developed further by Gardner or refuted by him, had already started by the time Iqbal took up the writing of Javid Nama in 1927. Several references in his prose work, The Reconstruction of Religious Thought in Islam (1930-34), written simultaneously with Javid Nama, indicate his familiarity with this type of work being carried out in his times.